Taste India at our Gelateria!

Greetings to all Gelato lovers!

We have some delicious new information to share with all of you.

Without any further due, we are very glad to announce that Premarche Gelateria is serving one of the tastes of India in the form of milk based Masala Chai gelato!! Come try out this new flavour before it finishes!

Besides our equally delicious gelato flavours, Acai (milk based) and Green Smoothie (milk based).

‘Chai’, is a masala (spice) flavored tea beverage that originated in India and is enjoyed by almost everyone in South Asia. Black tea is brewed with a mixture of aromatic Indian spices and herbs and to one’s preference, small amount of milk and brown sugar or honey can be added to experience fine harmony of sweet and sour. Its only recently that this beverage gained worldwide popularity resulting into many new and westernized  styles of preparation, becoming a staple item in various cafe, coffee breweries and tea houses.

Look at this beauty!

According to Mr. Nakagawa, the head Gelatiere (and CEO of Prema Inc.), this chai gelato is infused with tea plants from Assam (a north-eastern state in India which is primarily famous for Darjeeling Tea, other tea products and large tea farms). This wasn’t prepared just by using a masala chai ‘tea’ bag but instead, the process is started from scratch, just like how tea plants are prepared in order for them to be used in the chai and is, honestly a time consuming task to do it one by one. As an intern only, I am not sure about the whole procedure of making this gelato flavour, however, normally the beverage, chai, is prepared by employing the process of decoction and blending it into our own flavour because of its flexibility and variety in tastes and local customs. But the masala chai gelato takes double the effort and I can assure you that the end result was perfect and our masala chai gelato is worth the try!

As an Indian who drinks chai every afternoon when back home, this is a nostalgic taste far away from home! I am grateful to our CEO, gelato recipe master and Komamizu-san, gelato producer to have given me the honor of trying out the masala chai flavour just when I was feeling a bit homesick because the first bite was enough to bring back a truck load of memories! 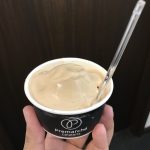 Call me a chai addict but now I’m successfully on the path to become a chai gelato addict!  If I had it my way, just like Indian people start their day by indulging in chai, I’d change that to having chai gelato every morning in Japan! Yes, the winds in Kyoto maybe a bit colder than before but I believe that it’s the best time to try new things before the winter makes it complete onset and the thrill of eating something as cold as gelato is a whole new feeling that may, unknowingly, warm your heart and make you smile!

And your smiles strongly motivates us to continue serving delicious gelato to you!